The LCD Board with I2C comms is a basic display board that accepts incoming data over I2C. It can be hooked up to a low-speed I2C network and its ID# can be set using a pushbutton.

After obtaining enough information on how to drive a 2 x 16 LCD unit with only three wires (by using a serial shift register) this board was my first attempt to produce something workable. 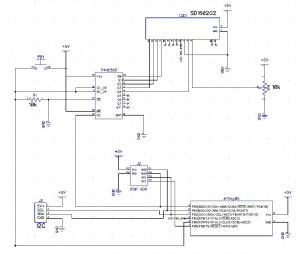 Be aware that I2C does not need a specific operating frquency. The code for this chip should be running on 8MHz in order with other I2C devices, but it may run on lower frequencies as well. I haven't tested this yet. So be sure to set the lower fuse byte to 0xE2 to disable CLKDIV8 and to make the chip run on 8MHz. Check the PROG.BAT or prog file for the proper settings.

To send data to the I2C LCD board you will need to use I2C and address it to the device's I2C id.

Use ASCII values to send individual characters to the display (e.g. '65' is 'A').

Use the '10' special command to position a character on the display.

Below you can see the display is connected to an Arduino Duemilanove over I2C. The Arduino is sending out some text and the display board puts it on the screen. 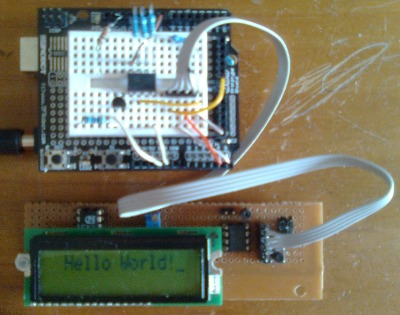 Side-view of the board with the LCD unit mounted on top. The LCD unit used is the one Jaycar sells in Australia. Model number is SD1602.

Top-view of the board without the LCD unit. Here you can clearly see the serial shift register chip I used to save on data pins to the mcu.

Top-view of the board with the LCD unit mounted. 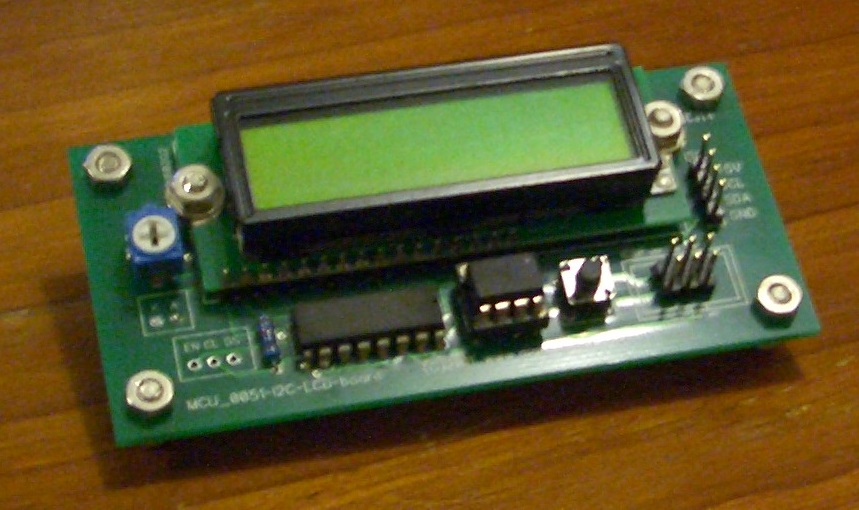 Custom pcb for this project

Here is a movie of I2C in action. I slowed down the sending of signals on an I2C master and enabled the display of control characters on the LCD board.

An explanation of the codes on the display: