GPIO pin on the RPi to trigger PTT

When using the Raspberry Pi for Packet Radio or APRS it is essential to bring the radio into transmit mode before sending any packets. One hack that works with varying degrees of success is to use the radio's VOX (Voice Operated Switch) if it has one. The idea being that dummy packets that are sent before the actual data are used to trigger the vox and we then hope that the radio goes into transmit just in time before the actual data is sent. With vox sensitivity on the radio and TXDELAY settings in /etc/ax25/soundmodem we have some variables to play with but it remains a bit messy.

The preferred method is to key the radio using a dedicated PTT line. This is normally achieved by putting PTT to GND and the radio goes into transmit. This connection of PTT to GND is usually done inside a hand-held microphone by the operator.

For automated operation such as Packet Radio and APRS where packets are sent at the control of the computer an alternative method is required. 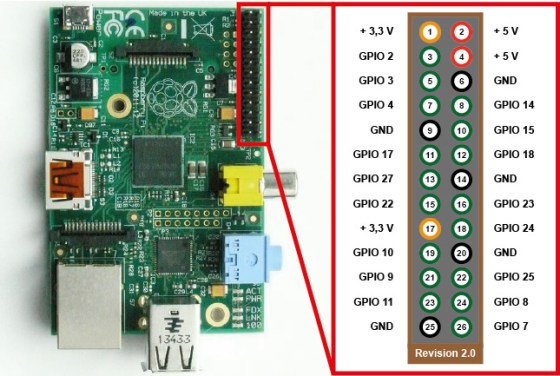 Before we can access this RTS signal on the Raspberry Pi we need to tell it to slightly shuffle the GPIO pinout a bit. The GPIO header on the RPi has several 'mappings' which tell which pin what to do (see http://elinux.org/RPi_BCM2835_GPIOs). We can change the function of GPIO pins by changing the mapping for those pins. The chip controlling the GPIO on the RPi knows of three pre-defined mappings. Although the mapping schemes are fixed, there is one mapping which brings out RTS of the on-board serial port of the RPi to a GPIO pin. For the (older) Rev2 Model A and B RPi's this GPIO pin is on the P5 header, for the A+ and B+ models the GPIO pin is on the main header.

Unfortunately the Raspbian software does not come with a program to easily modify the GPIO pin mapping. For that we need to make use of a third-party piece of software from Github user rewolff called bw_rpi_tools.

Full source code and instructions can be found here: https://github.com/rewolff/bw_rpi_tools

if one does not already have git support installed, that must be done upfront:

To use the IO pins we first need to “free” the serial port for our usage. The default configuration of the linux image uses the built in serial port to dump kernel messages and as a way to log into your raspi.

From /boot/cmdline.txt we need to remove the following options:

We also need to stop the system to spin up a terminal on the serial port. For this we put the following statement in /etc/inittab into comment (add # in front of the line):

OK, the serial port is ours, but we still need a tool to switch the GPIO assignment.

before the make install type: make followed by the command shown above: sudo make install

If you now look into the (default) install directory /usr/local/bin you will find: a) the file: gpio_list b) a soft link: gpio_setfunc -> /usr/local/bin/gpio_list and some more soft links.

Once the software is installed it is simply a matter of setting the GPIO mapping for the desired pins at boot-up of the system. I prefer to place the following lines inside /etc/rc.local

Below are two schematics that show how to interface to different handheld radios to the RPi with the GPIO PTT method. Please note that many radios will have different pinouts so it is important to check the correct way of keying PTT before you try anything out. 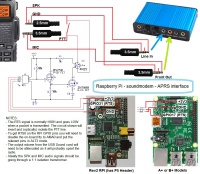 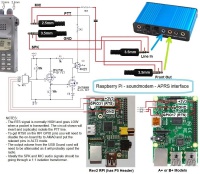