When I first purchased this charger I was pleased that it appeared to charge batteries as advertised. But after a while I started to wonder if there were any smarts inside the charger. 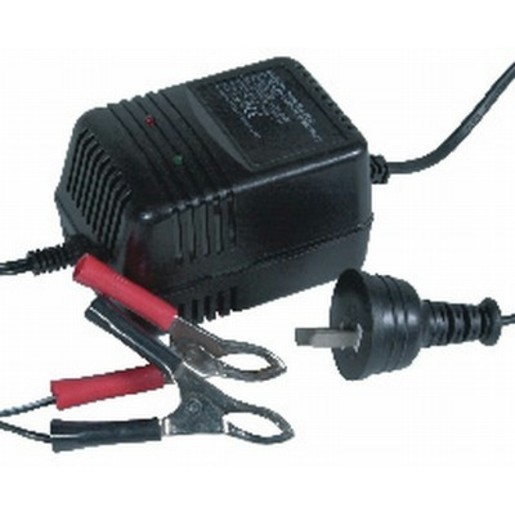 To demonstrate this, I decided to put a small 1.3Ah SLA battery to the test. 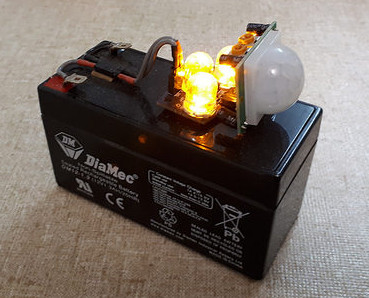 I use this battery to power a small PIR-activated night-light with 3x LEDs. Power consumption is minimal and it only comes on a few times per day so I expect it to last for many weeks on a single charge. Standby current draw is 37uA, and when the PIR detects motion it activates the LEDs and power consumption goes up to about 30mA for 5 minutes.

After letting it run for a week I decided to measure the voltage and was surprised to see that it was already down to 11.8 Volts. So I put in on the charger and decided so come back later until the charger indicated with a green light that the battery was fully charged. At first I didn't measure the final voltage after charge, and simply put the battery powered night-light back on the window sill, expecting not have to recharge it for at least several weeks.

Curiosity got the better of me after a week and I measured the battery voltage again. 11.8V What the..? Clearly something wasn't right here.

I put it back on the charger, but this time I also connected my voltage data-logger. 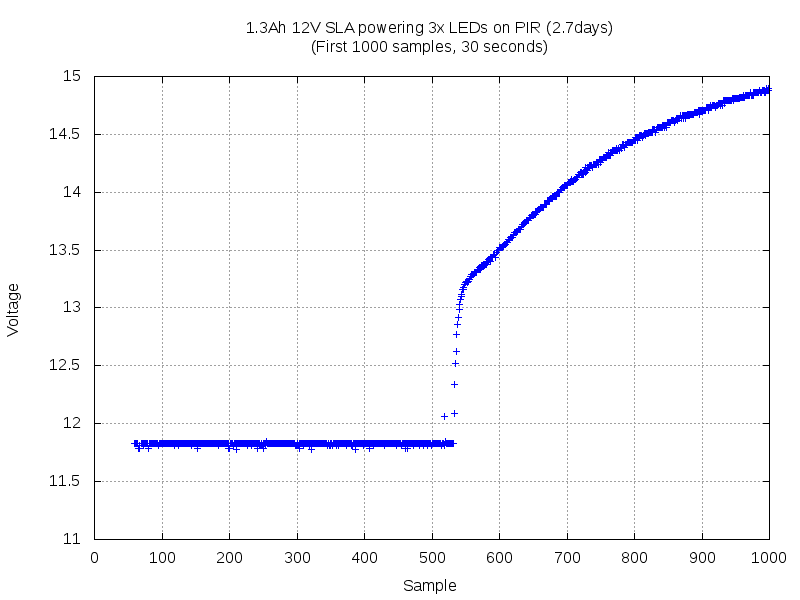 This first graph spans about 30 seconds of activity (1000 samples worth) and clearly shows the initial starting voltage of about 11.8V. About 15 seconds after starting the data-logger I connect the charger and let it sit there until the green light comes on. After about 15 seconds the battery already reaches 14.8V. 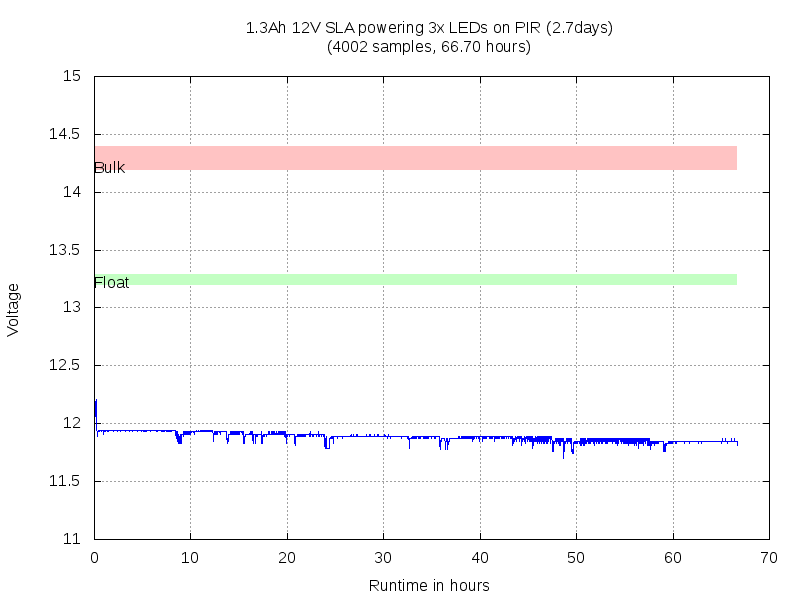 The second graph spans about 67 hours (about 2.7 days) and shows a few interesting bits. First, on the far left you can just see the voltage coming down from 12.2V and then stopping at about 11.9V. The green light had already come on and I believed that this indicated that the battery was full. I must have had the charger connected for maybe 5 minutes and simply thought that the charger did its work very quickly (Not so! Read on...). I put the night-light back on the window sill with the data-logger still connected.

After about 2 days I wanted to find out how my battery was doing and decided to measure the voltage. To my surprise the voltage had dropped down again to 11.7V, but now I had the data-logger graphs to hopefully reveal what had happened.

Looking at the graphs above it clearly shows that the power consumption is fine during normal operation, but the battery just isn't charged full enough. How full? Well, that is part of the debate, but some common indicators from batteryuniversity.com and other sites say that for a 12V SLA battery the full-state is around 12.8V.

My battery charger however was already switching over to the green 'full' light after about 60 seconds, and stop charging at about 12.2V.

I wondered what would happen if I would let the battery charger stay connected AFTER the green light had come on for a few hours and see what the data-logger could reveal.

Again, I hooked up the battery charger, and noticed that the green light came on after 60 seconds already. 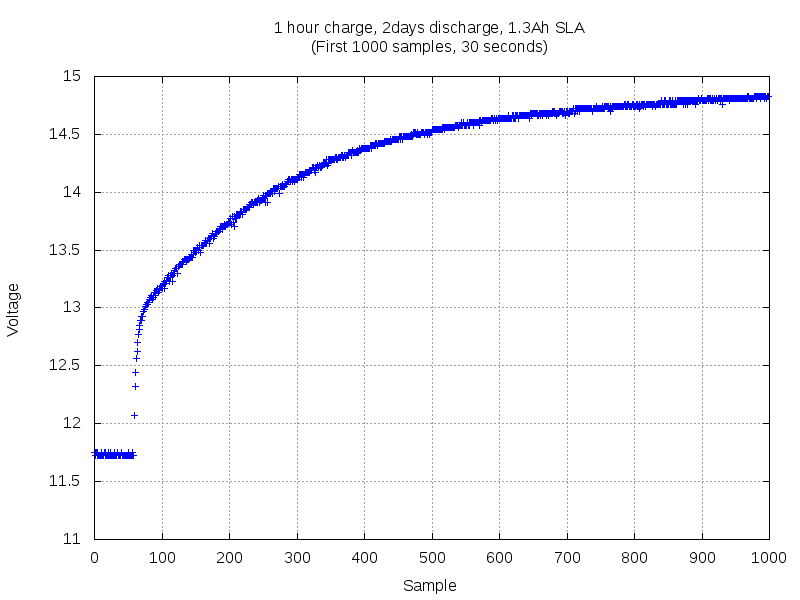 The above graph shows that the battery reaches 14.8V within 30 seconds of charging.

The long-term picture over 68 hours, including 2 hours of trickle charge shows this: 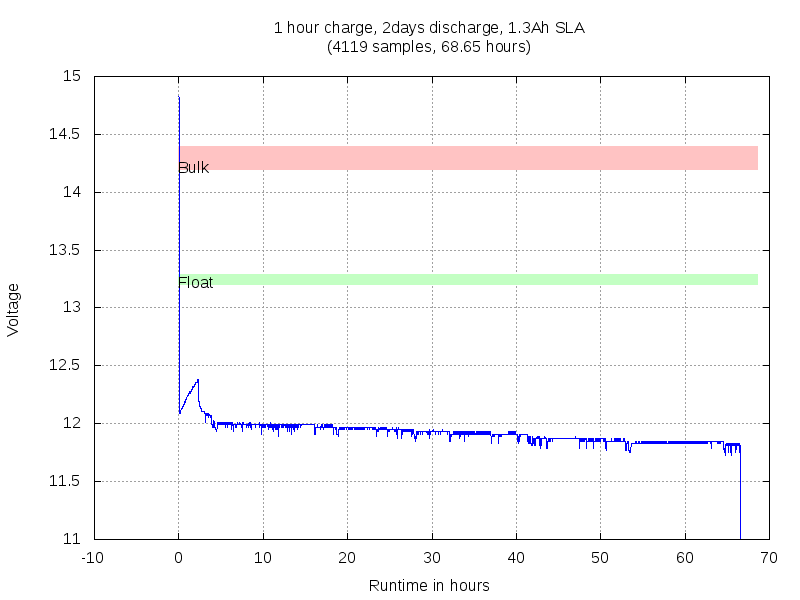 Here, I let the charger stay connected for another 2 hours AFTER the green had come on.

On the far left you can see the battery voltage coming down from 14.8V and stop at about 12.1V and then rises up slowly to 12.4V over a period of about 2 hours. This is the behaviour of the trickle-charge feature of the charger. It is after these 2 hours that I disconnect the battery from the charger and put the night-light back on the window sill and let it sit there for the next two days.

When I saw this graph I realised that I was on to something. The charger does not use the green light to show that the battery is full, but only indicates that it has reached about 15V and then then switches over to trickle-charge. The two hour trickle-charge raised the battery voltage a bit higher than it was before. Previously I had been putting the battery powered night-light away with just 11.9V of charge, I could now see that after 2 hours of trickle-charge the battery was holding charge at 12.0V. This led me to experiment with a much longer trickle-charge period.

I measured up the voltage after about 2 days of use and saw 11.7V again, but that no longer surprised me. Now I wanted to see what would happen if I let it sit on trickle-charge for about 3 hours.

I connected the battery charger about 10 seconds after starting the data-logger. 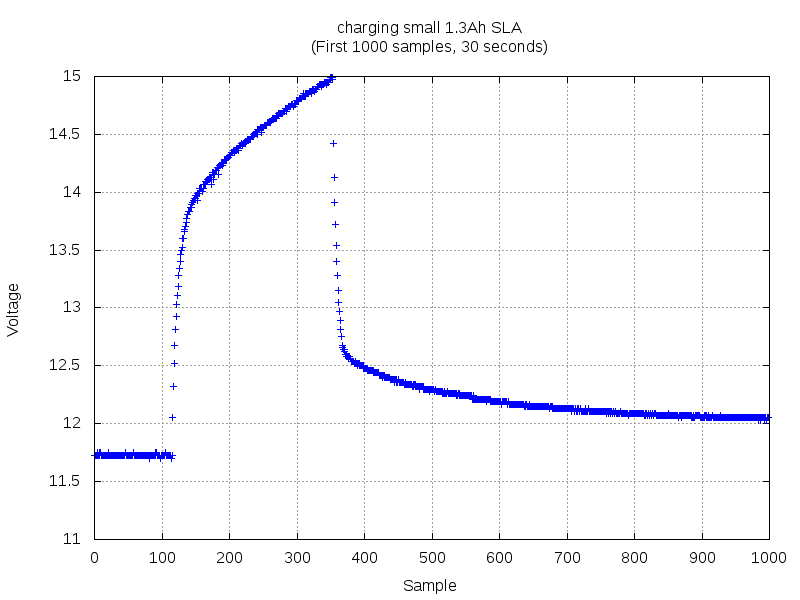 This shows that in the first 30 seconds the battery quickly shoots up to 15V and then the charger backs off and picks up again at about 12V. Interesting. My only explanation for why we see this up-and-down behaviour in one 30-second graph is that the battery may have been in healthier state. Maybe just 2 hours of trickle-charge already helped. 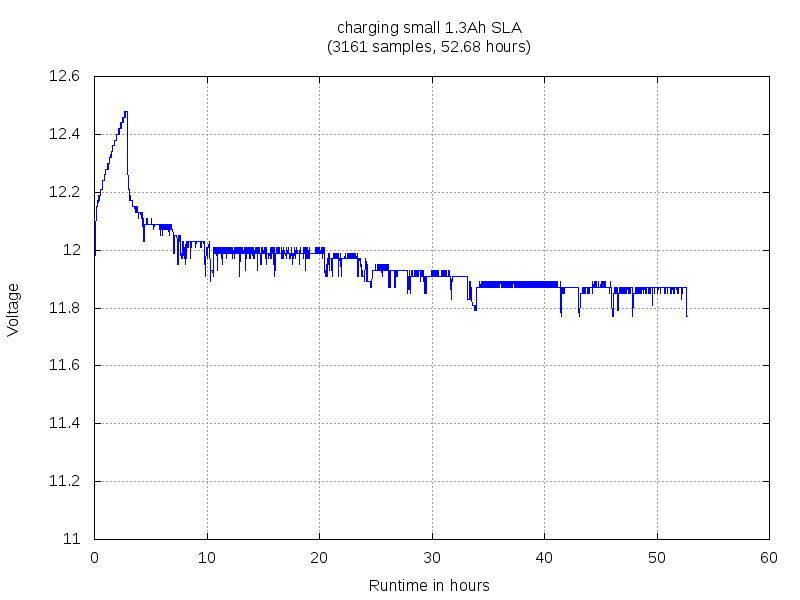 This means we can leave the trickle-charge on for a much longer period.

Let's see what a trickle-charge over 5 hours looks like: 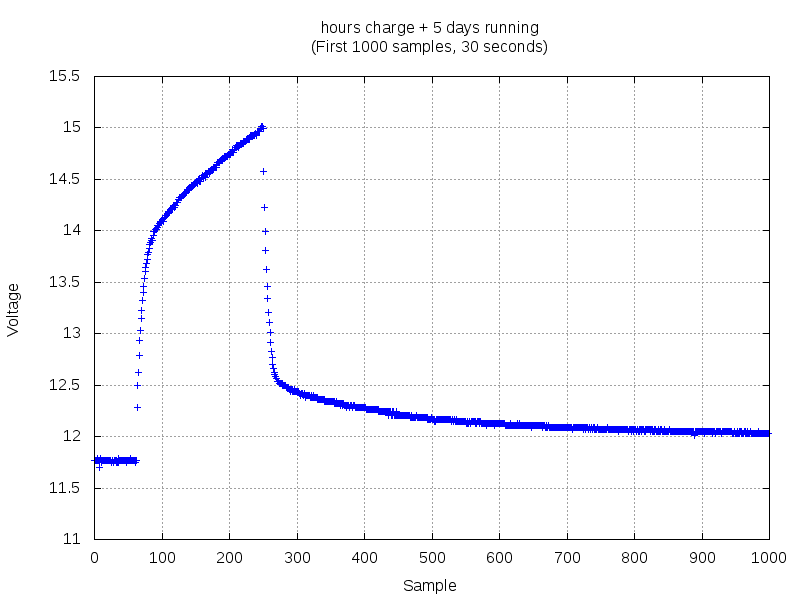 Again, we see a fairly quick charge to 15V; the green light on the charger comes on. 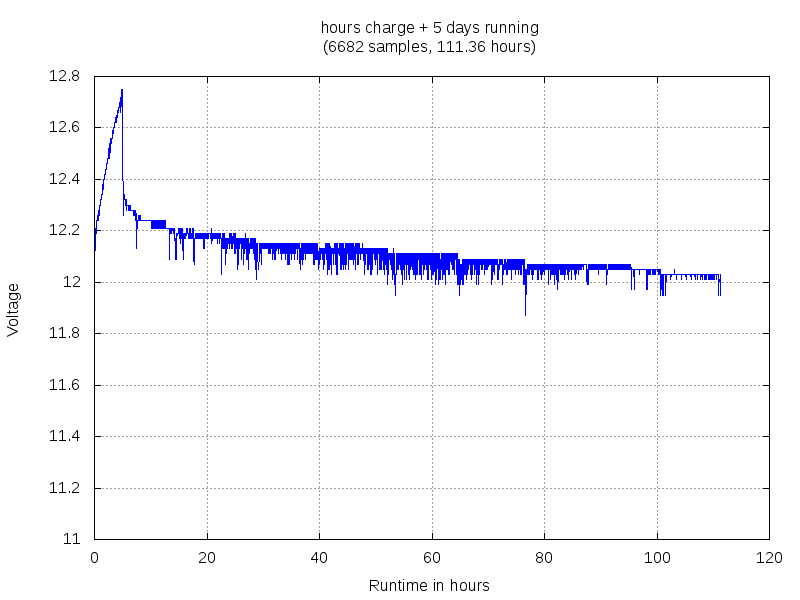 After leaving the battery connected for 5 hours on trickle-charge, the voltage rises steadily to about 12.75V. What's even better, the battery voltage after a runtime of 5 days is now still just above 12.0V.

This is starting to look better and better.

Let's try trickle-charging for double that, just over 10 hours.

The battery reaches 15V quicker than before (probably because we started at 11.9V). 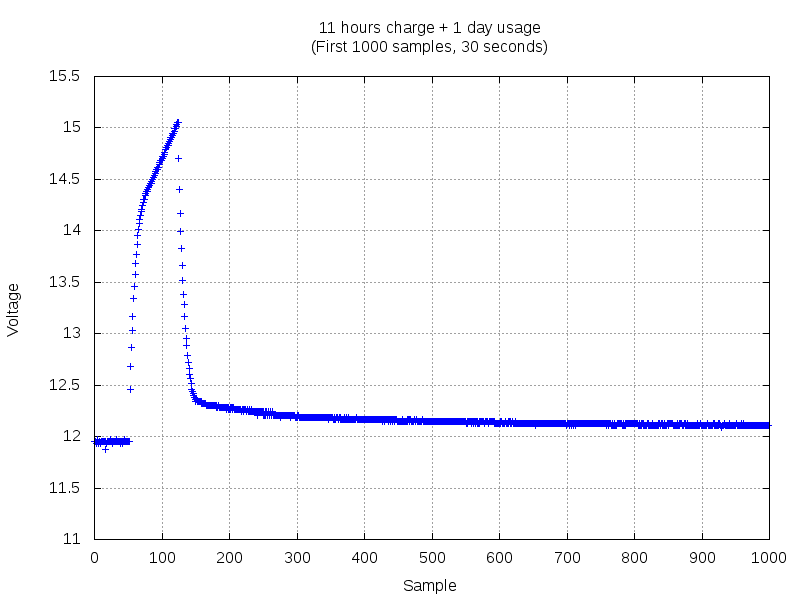 And we can see that the trickle-charging has brought the battery voltage before disconnect up to a maximum 13.4V. 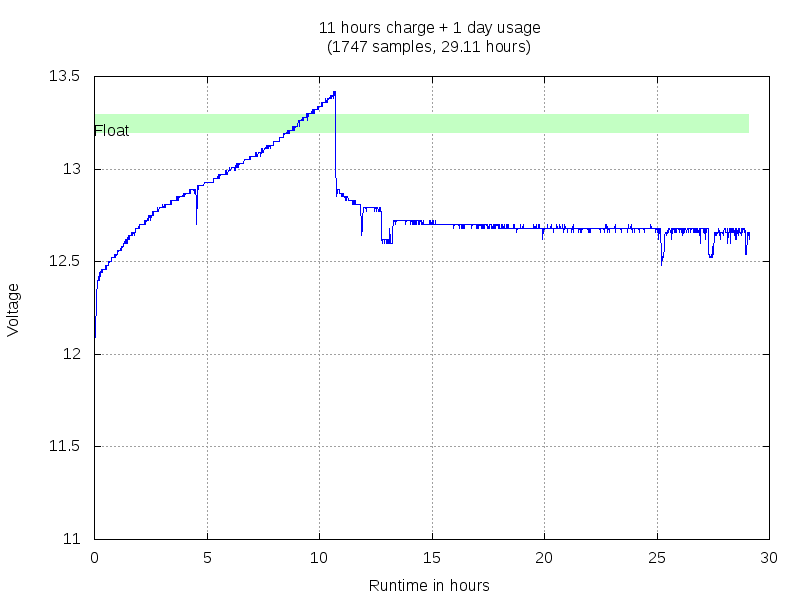 Look at that! The final resting voltage after trickle-charging is about 12.6V. This should give the application a chance to last the weeks' lifespan I expected in the first place.

Only now am I realising that I never really charged this battery properly with said charger.

According to the Battery Charge Curve graph, the Float charge is around 13.6V so I can easily leave the charger connected for a few more hours. This would probably be the only way to see if the charger really stops at a certain voltage.

(waiting for testing to complete, watch this space..)