Difference between revisions of "Tristatelogic-vs-opendrain"

The datasheet for the MCP73831/2 LiPo charge controllers shows that the chip can be ordered with the STATUS pin preconfigured as either Tri-State Logic or Open-Drain.

So what is the difference and why would you want one over the other? 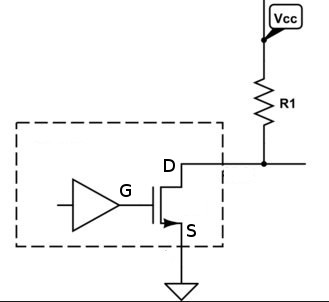 If we want to add an LED to show the charge status with the open drain charge controller we need to have a look at the available signals for the MCP73832 from the datasheet:

Table 5-1 summarizes the state of the status output

during a charge cycle. 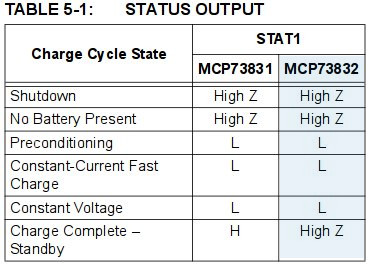 As you can see the available signals are only:

If we were to place an LED to Ground in series with R1 like so: 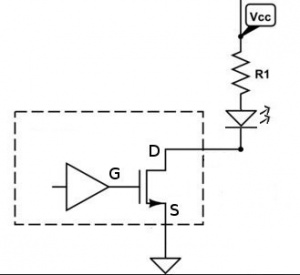 ..the LED would turn on when the Gate is ON (Closing the path from Drain to Ground)

In this configuration, and according to the datasheet, the LED would turn on:

When the battery is full, the 'Charge Complete' status turns the Gate OFF and the path to Ground as seen from the Drain is disconnected and the LED Cathode is floating at VCC, which effectively turns the LED off.

A little more on the pull-up resistor when we're talking about microcontrollers. Most microcontrollers have an internal Pull-up Resistor and can source (some) current to power external circuitry like a LED. The schematic will then look something like this: 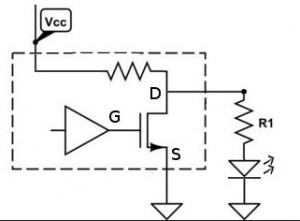 Now let's have a look at the tri-state function of the STAT pin. 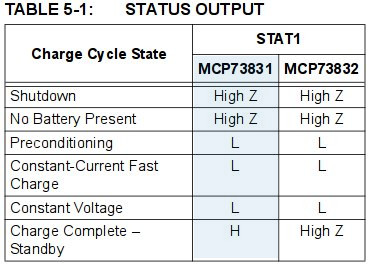 STAT is an output for connection to an LED for charge

status indication. Alternatively, a pull-up resistor can be

applied for interfacing to a host microcontroller.

STAT is a tri-state logic output on the MCP73831 and

The charge status output of the MCP73831 has three

Impedance (High Z). The charge status output of the

MCP73832 is open-drain. It has two different states:

tus output can be used to illuminate one, two or tri-color

LEDs. Optionally, the charge status output can be used

as an interface to a host microcontroller.

And this is an Open Drain configuration:

To use a common anode tricolour LED (two LED's with their anodes connected, not bicolour):

No chip power supply: LED off

You could implement a 'red - charging, green - done' with same LED, but with an extra NPN transistor on the green cathode. So when the STAT is low, transistor is off, but pulls the red cathode low. When STAT is high, transistor on, green LED on, red off.