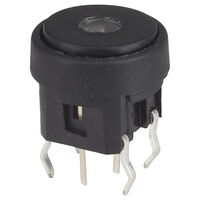 When all done, the connections to the switch should look something like in the below picture.

Use this image to connect the IDC header onto the Raspberry Pi connection header pins.