These days, many low-cost antennas for the 70cm ISM band can be obtained from online sellers though eBay and Amazon. I was curious to see how well they performed in a variety of environments. I was also interested to see how well my own design, the 'Captcha' PCB dipole, would stack up against these commercially available antennas.

Here, we put several models to the test.

How the range was determined

I tested these antennas on low power at 2.5uW (-26dBm). For range testing I wrote two sketches; one for a stationary 'base' unit, and one for the mobile unit that I took with me whilst walking away. The mobile unit is equipped with a LED and a piezo buzzer and sends out a packet every 2 seconds. When the base unit receives a packet, it re-sends it at full power (100mW, 20dBm) back to the mobile unit. When the mobile unit receives the re-sent ack packet a short beep is sent to a piezo transducer. That tells me that the base station can still receive the packets. I know that I've reached the range limit when I stop hearing confirmation beeps. For this test I did not rely on GPS as the distances are relatively short and GPS would probably introduce a significant measurement error of several metres. Instead, I just walked it out and counted my steps. This test is all about the relative range between the various antennas, NOT the real range when using radios at maximum power. 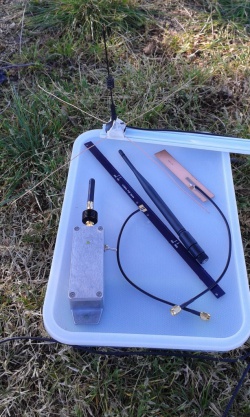 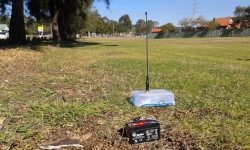 The Base Station and terrain

I tested in a small park surrounded by trees and residential buildings, a level field, no immediate buildings nearby, dry soil ground.

The distances shown below were obtained by attenuating the signal down to -26dBm using a 30dB SMA attenuator. This was done purely to limit the range to well within the size of a small park where I did the testing. 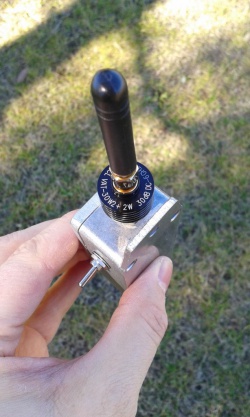 The Mobile Unit with a 30dB attenuator